This article discusses what an IRS levy is and how to stop an IRS levy.

A federal tax lien encumbers a taxpayer’s property. It is filed with the county clerk and is intended to provide notice to 3rd parties (such as creditors) that the IRS has a secured interest.

In almost all cases, the IRS will file a tax lien if the tax debt is over $10,000. If it’s less than $50,000, a lien can be prevented by entering into a streamlined installment agreement.

An IRS levy, on the other hand, is a legal seizure of property to satisfy federal tax debt.

When can the IRS levy?

There are three procedural requirements the IRS must take before they can legally levy:

The first notice and demand for payment is usually a CP14 notice, which looks like this.

The final notice that provides the taxpayer with a 30 day right to a hearing is a Letter 1058 or LT11. 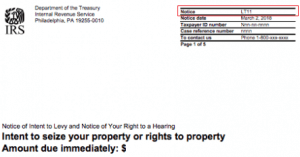 If you receive either of these letters, you have 30 days to make arrangements with the IRS or request a collections due process hearing.

After those 30 days have lapsed and you have not taken action, the IRS can levy your property, which can be in the form of wage garnishments, bank account levy, and any other personal or business assets.

Wage garnishments are one the most common types of IRS levy actions.

If the IRS levies (seizes) your wages, part of your wages will be sent to the IRS each pay period.

Part of your wages may be exempt from the levy and the exempt amount will be paid to you. The exempt amount is based on the standard deduction the number of dependents you are allowed for the year the levy is served.

The IRS will leave you with very little income if they garnish your wages. The garnishment will be ongoing until you’ve made arrangements to pay the tax due or if the IRS releases the levy.

The IRS can levy any bank accounts that the taxpayer has financial interest in.

Unlike a wage garnishment, an IRS bank levy is not ongoing. Each levy only covers the funds in the account at the time of levy.

If additional deposits are made, the IRS cannot seize them without initiating another levy action.

After your bank receives a levy, it must wait 21 calendar days before surrendering the money to the IRS. This provides the taxpayer an opportunity to notify the IRS of any errors.

It is rare for the IRS to levy retirement accounts. The IRS will only levy such accounts if the taxpayer has engaged in “flagrant conduct” such as:

Before the IRS can seize tangible property, alternative collection methods, such as an installment agreement, must be thoroughly considered.

Many taxpayers believe that their personal residence has homestead protection. While that may be true for other creditors, it does not apply to the IRS.

The IRS can levy on a personal residence if a U.S. district court judge approves it in writing and with the approval of the IRS Area Director.

It is very uncommon for the IRS to seize a personal residence.

How to get an IRS levy release

Make arrangements with the IRS

The IRS will release a levy when the taxpayer has made arrangements to pay the debt, such as by entering into a payment plan.

Before the IRS will consider a payment plan, the taxpayer must have filed all tax returns and is paying current taxes.

This could put some taxpayers in a bind if they are not compliant with all their tax return filings. It could take some time before an agreement is reached with the IRS.

A taxpayer does not have to be in compliance on filing and paying current taxes before the levy is released due to economic hardship.

If negotiating with the IRS fails, taxpayer can contact Taxpayer Advocate Service (TAS). TAS can stop the levy by issuing a Taxpayer Assistance Order.

TAS should only be contacted in extreme cases after other options have failed.

You should always consult with a tax professional before making any decisions about how to best resolve your particular matter.

Taxpayers that owe outstanding IRS tax debt should apply for one of the collections alternatives:

Feel free to leave a comment. DO NOT PROVIDE PERSONAL INFORMATION, as your comment will be shared on irsofficesearch.org.

irsofficesearch.org is privately owned and we are not affiliated with the IRS and are not government employees.

No information provided on this site should be relied on for tax, legal or other advice.

Information on this site may be outdated. Visit IRS.gov for the latest information.

If any of the information on this page is incorrect, please let us know in the comments below.